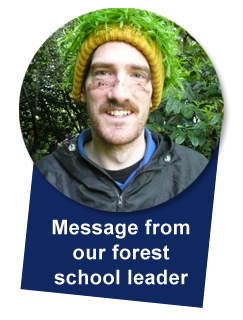 Let your steps now be a little more adventurous!

At Archfield House we’ve always taken pride in our children’s provision. A few years ago we decided to take the next step and I volunteered to train to become a qualified Forest Leader and take us into a new era…

I trained at Bridgwater College, initially spending one week on practical and theory before essays, handbooks, evidencing and policy writing became part of my on-the-job learning. The great thing about a course like this is that once the initial week is completed enrolees are considered Forest Leaders, allowing us to lead Forest School sessions from the get-go.

Naturally our first Forest School forays were based wholly on what I had learned and the activity ideas I’d taken away from that first week, which is no bad thing; our trainer was an incredibly inspiring man with a thick Brummy accent that you can’t help but pay attention to!

However, once I’d settled into- and come to realise the unique practicalities involved in running Forest School as part of Archfield House’ existing routines and procedures, I started to experiment a little more. We have amended the planning sheets accordingly as time has gone by and now sit much more snugly within the overall planning cycle of our pre-school room. Activities became less a tick box of forest-themed activities (as might be expected of a trainee) and more a reflection of children’s ongoing interests complimented by the amazing learning opportunities provided by the outdoor environment. At one point in this process I even experimented with wholly child-led sessions with no additional resources whatsoever. This approach is advantageous in that it allows complete freedom for the children to explore. However, it suffers somewhat in that once the children have fully acclimatised to the environment (at least in its current form!) they become much less inspired and engaged. Subsequently their opportunities to learn diminish without more directed adult interaction. Our current format involves planning a set of resources and/or activity, based on a known interest or learning path that children are encouraged to join in with, whilst leaving time for free play. I have found that initiating the adult-initiated activity early and allowing it to run its course naturally sparks a much greater variety of free play- and child-led themes. Respectively children’s ‘next steps’ and following Forest School sessions practically write themselves!

Archfield House and it’s sister nursery Woodland House have, for as long as I can remember, put on Dad’s Day’s and other such family events on Saturday mornings throughout the year. These are a great chance for parents and other family members to join in with their children as they partake in the kind of fun activities they usually would do on a nursery day. These events involve bacon butties, paper aeroplane competitions amongst the dads and a nice story to round off the morning. Recently we chose to host one such event at our Forest School site to give parents the opportunity to see what great things happen when children get muddy. As an extra special focal point we managed to arrange for a visit by the fantastic Neil Johnson from the ‘Music in the Forest’ project who provided a special selection of musical activities and sing-a-longs throughout the session, all immersed in the forest environment. The morning was an incredible success and parents really appreciated gaining incite into another area of our nursery’s provision, and it was clear that they could see what an invaluable asset this facet of our practice is.

Over the last few years people have been raving about the Forest School ideology as if it were a weight loss supplement! It’s now really starting to gain traction here in the UK and for good reason; those that were quick to see its potential benefits have had time to put them to the test and now have first hand experience and evidence to support said ideology. And if you don’t believe me you are more than welcome to join us and see for yourself.